With my first son Tyler, I wrapped him completely in cotton wool, and then in bubble wrap, and then a quilt.....you get the picture. As a first time parent I had no clue. I was overprotective and a little bit crazy. Every little thing panicked me. Don't get me wrong everything still worries me but I just handle it in a different way now.
After having three children my parenting style has really changed. I know what really matters and what to brush off. With Tyler I didn't like him to get too messy and I taught him to be gentle and kind and never let him play boisterously. He is such a sweet sensitive soul because of it. However, when we went to playgroups I would intervene if a disagreement happened over a toy or if someone was pushing and shoving I would move him away from the equation. As a result, along with being so kind and caring he also didn't know how to stick up for himself as his mama was always so fiercely protective. Jaxon being number 3 it is a whole different ball game for me and I really noticed it when I took him to his first playgroup last week. These little arguments over toys need to happen, they need to be questioned and they need not always have their own way. I know now that this isn't just one child being mean, or naughty but it is them learning how to communicate and be patient. The same with tantrums, I would avoid them at all costs with Tyler and do anything to distract him, but if distraction doesn't work for Jaxon and he really just wants to shout it out, I let him. Imagine being a child and your whole world was that packet of chocolate buttons that you weren't allowed to eat. They just don't understand, and its all a learning process. I just let him thrash it out and then give him a cuddle. It was a funny feeling watching certain things going on in that playgroup, when I know 8 years ago with Tyler I would have been so upset and annoyed by them. I'm not saying that I sit there and let Jaxon take other children's toys or let other children whack him with trains and lego blocks but these days I am much more relaxed about everything. These little Toddler groups are a place for our little monsters to grow, learn and become sociable. Last week Jaxon learned to wait his turn for the slide.....I wonder what he will learn next time!? 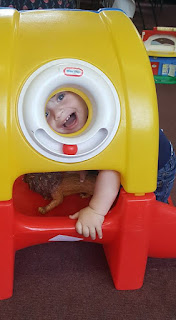